Dining out can be hard, especially when your choices are limited. Being on tour, I realized that diner food is sometimes our only option because it is served 24 hours a day. Because of this, my mission was to try and discover which food choices are the best for me to eat while dining out at one of America’s most famous diners, Denny’s. This is what I discovered:

Now lets take a more detailed look at the menu and explain why I made some of my suggestions:

When it comes to having beverages at any restaurant, I almost always suggest going with water. It is a safe choice, it is almost always free, its 0 calories, and it is good for you. YOU NEED WATER!!! with that said, Denny’s offers a variety of beverages to choose from. If you need to have something other than water because you have a crazy sweet tooth going or you are just needing to fill a desperate craving, most of the choices are ok, just be aware that they have high sugar contents. Definitely, however, stay away from the milkshakes. Milkshakes can be tasty and delicious, but the milkshakes at Denny’s have between 580-890 calories, 25-45g of fat (16-20g of saturated fat), 68-113g of carbs, and 55-77g of sugar. To put that into perspective, in 7 Pixy Sticks, which are basically pure sugar, there is 15g of sugar. So in one milkshake there is an average of around 30 pixy sticks of sugar, almost as many calories as a stick of butter, and about the same amount of saturated fat as 4 tablespoons of lard.

The smoothies are actually not too bad, except for the fact that there are high amount of carbs and sugars. None of the smoothies have any fat and are 270 calories or less. The best smoothie choice is the Orange Grove Smoothie. With only 120 calories, 29g of carbs, and 22g of sugar, this smoothie is the healthiest choice among all of their smoothie options.

The Fit Slam is your best choice when it comes to picking one of the ‘Slams’. The Fit Slam has 360 calories, 10g of fat, 30g of cholesterol (incredibly lower than all of the other options), 820mg of sodium (lower than all of the other options as well), 46g of carbs, and 24g of protein. Overall it is not a bad choice for a meal. On the other hand some of the other ‘Slam’ options are down right disgusting when examining the nutritional information. Here is what is in some of the more ‘hearty’ Slams Denny’s offers:

To understand how this relates to the FDA suggested 2,000 calorie and 2,500 calorie diets, please refer to the figure above.

The best choices to make for sides are the Egg Whites, English Muffin without Margarine, Grits, Oatmeal, Seasonal Fruit, and Low Fat Yogurt because of their relatively low fat contents and other nutritional benefits such as protein and vitamins. The Hearty Wheat Pancakes I am on the fence about because although 2 pancakes only have 1.5g of fat, 8g of fiber, and 10g of protein, they also have 950mg of sodium and 64g of carbs. If you are not on a low carb diet and are not worried about sodium intake (an athletic person or a body builder for example who may need more sodium than the average person for muscle growth) then I would say they are ok. Definitely stay away from the Cheddar Cheese Hash Browns, Chicken Sausage Patty, Bacon Strips, Everything Hash Browns with Onions, Cheese and Gravy, Pancake Puppies, and Sausage Links, because all of them have relatively high fat contents and bad nutritional value. For instance, 4 sausage links have 30g of fat and 6 pancake puppies have 101g of carbs and 1020mg of sodium.

The Fit Fare Omelette is pretty decent. Although it may surprise you that an Egg White Omelette has 18g of fat, I still recommend it over all of the other choices because it has the lowest amount of sodium at 870mg, the lowest cholesterol at 65g, and 34g of protein which is a good amount for a meal. Some of the other Omelette choices I would definitely not recommend such as:

FINAL WORDS
In general, you can see that many of the choices at Denny’s may not be as healthy as you think. I hope my suggestions help you make some healthier decisions when going to eat out at some of your favorite restaurants. Please contact me with any questions of concerns at corestrengthalec@gmail.com. 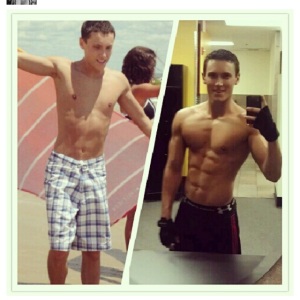 This is my personal transformation over two years.

My name is Alec Varcas and I decided to make this blog to help advise people on different workouts, diets, and lend a helping hand to anyone who may need it. I started gaining interest in health in nutrition about two years ago when I decided that I was not happy with how I looked or how I felt. I was going through some big life changes and thought that changing my workout routine and diet would help… and it definitely did. I am letting you know now that I am not a Certified Personal Trainer or a licensed nutritionist. I simply am creating this blog to give my opinion on certain health and exercise issues people may have, give advice simply based off of my own experience and constant research I have done, and show which workouts I like the best and which supplements and foods I find the most fulfilling.

I currently am on the Spamalot National Tour that is traveling around the United States from January to April 2013. Before being on tour, I studied Marketing at Quinnipiac University in Connecticut where I graduated in January 2012. I then began working for a Yale University funded study called the ‘Veterans Aging Cohort Study.’ While living in one place and having a steady schedule, I was able to go the gym 5-6 times a week very easily for as long as I wanted, basically whenever I wanted. I also was able to go shopping for any food I needed and cook/prepare any food at my own convenience. Being on tour and moving from city to city, I have realized how hard it is to maintain a strict diet and exercise schedule while traveling. With this being said, I thought this blog could have a strong focus on how to stay fit while on the road or when your resources (a kitchen, gym, time) may be limited.

My focuses for this blog will specifically include:
1) Giving advice on how to make healthy choices at popular restaurants
2) Showing specific workouts that I find to be the most effective to target certain areas of the body
3) Featuring people I idolize because of the progress they have made with their own fitness goals and sharing some of their fitness tips
4) Answering any questions you may have that you think I can help with

Please email me with any questions or blog topic ideas you may have at corestrengthalec@gmail.com
I look forward to hearing from you!